Keller was famous for his illustrated public lectures on music, and this volume publishes for the first time the full text of his celebrated 1973 series on Beethoven’s Op.130.

Keller gave these lectures at the invitation of Alexander Goehr, and they were illustrated live by the Aeolian Quartet and broadcast by the BBC. They were in part a response to Joseph Kerman’s newly published monograph on The Beethoven Quartets, and in part a demonstration of his “two-dimensional theory” of music, which posits a vital tension between “well-defined expectations” and ‘”what the composer does instead”. These lectures have now been transcribed, and appear in print here for the first time: they form Keller’s most substantial examination of a single chamber work. Keller had intended a full-length monograph on the quartet, but never got further than three chapters, of which the second, on “String-quartet Playing”, is included here along with related materials. The book comes with a supplementary volume of music examples, including the entire score of Op. 130, and is illustrated with lively string-quartet drawings by Keller’s wife, Milein Cosman. “This is a detailed and revealing biography, rich in context and background, of one of the great musical thinkers, writers and broadcasters of our time. It casts a penetrating light on the post-war cultural scene and the passionate internal battles of music broadcasting on the BBC. Keller’s many enthusiasms, from Schoenberg and Mendelssohn to Gershwin and the Beatles, shine through his fiercely communicative prose. And all are illuminated by the moving personal integrity of a man who, facing extinction by the Nazis in 1938, swore that if he survived “I’ll never again be in a bad mood, whatever the circumstances of my life or death”. Alison Garnham and Susi Woodhouse have written a vital chapter in the musical history of our times.” (Nicholas Kenyon)

Published to mark the 2019 centenary of Keller’s birth, this is the first full biography of Hans Keller and the first appearance in print of many of his letters. Eight substantial chapters, integrating original documents with their historical context, show the development of Keller’s ideas in response to the people and events that provoked them. It was a vital time for music in Britain, fuelled by unprecedented public investment in the arts and education and the rapid development of recording and broadcasting. Keller was at the centre of all that was happening and his far-sighted analysis of the period is deeply resonant today. This volume was published for Britten’s centenary in 2013. It contains a large selection of the best of Keller’s writings on Britten, an illustrated study of Keller’s and Britten’s relationship through their correspondence (with their letters reprinted in full for the first time), a reprint of Keller’s long out-of-print handbooks on The Rape of Lucretia and Albert Herring, and an ‘Operatic Sketchbook’ of Milein Cosman’s drawings from life. Published in 2010, this book contains Hans Keller’s complete writings on Stravinsky, illustrated with a large selection of Milein Cosman’s drawings and prints of the composer, with a preface by Hugh Wood, setting the Keller-Cosman partnership in the framework of the British musical life they enriched. This is the first collection of Hans Keller’s psychoanalytic music criticism – looking at composers, performers, listeners and critics – much of which has never been previously published. This volume contains the full scores of all Keller’s Analytical Scores, together with introduction and commentary in English and German. 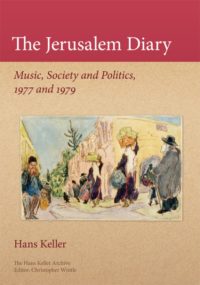 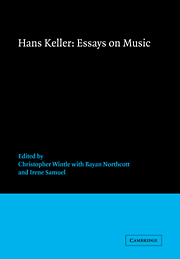 This is a reissue of the book first published by Keller under the title 1975 : 1984 minus 9. It is a passionate defence of individualism, and a reflection on ‘the state of things we’d reached in 1975 in areas of life I know’ – music, politics, psychoanalysis and football. This brilliant and controversial book is Keller’s assault on ‘criticism’ and the ‘phoney professions’ of the music critic, the broadcaster, the musicologist, the conductor, the politician, the psychoanalyst, the teacher and the editor. That Keller himself was active in most of these fields at one time or another was an irony of which he was well aware.

Although many composers have written string quartets, only a few have possessed an intrinsic mastery of the medium. Of these Haydn was the first and, thought Keller, in one definable sense the greatest.

Written primarily from the view of the player, this classic book is a profound and detailed examination of Haydn’s 45 greatest quartets, the fruit of a lifetime’s devotion to these works.