The Trust is deeply saddened to learn of the death on 14 August 2021 of composer Hugh Wood.

Hugh was a close friend of both Hans Keller and Milein Cosman and was a Patron of the Trust since its foundation.

Hans and Milein first met the young Hugh Wood at the Dartington Summer School of Music in 1958. It was their first visit, Hans having been invited by William Glock to give classes in analysis to ‘our young Boulezerie’. (Characteristically, Hans decided to teach something completely different: the ‘far more important’ topic of the interpretation of Haydn’s quartets.)

Although Hans and Milein were new to the Summer School in 1958, Hugh had been attending it for years, since its earliest days when it was housed in Bryanston School in Dorset, to which he hitch-hiked all the way from his home in Lancashire. And it was during his first visit there, while listening to Monique Haas playing Ravel’s Tombeau de Couperin in a late-night recital, that ‘I first knew, overwhelmingly, that I wanted to make music my life.’

It was 1948 and Hugh was sixteen — rather late in the day to be beginning, he later thought, ‘and I’ve suffered from this late start ever since.’ At the time, he was absorbed in poetry as much as music (a collection of his early poems, Summer in Tewﬁk, was published in 2013) and further distracted by the wide-ranging intellectual curiosity that was to win him a History scholarship to Oxford.

His arrival there was delayed by national service, which took him as far as Egypt. In the interim Oxford had established its new Faculty of Music — which Hugh found ‘presents to the outsider the gloomy appearance of a palace of ice’, and actively discouraged the young History student from attending its classes. Nevertheless he spent much of his time making music in one way or another, and took every opportunity he could to write incidental music for student productions.

‘Trying to write music is a Sisyphaean task, time-consuming, arduous, unproductive and rather maddening,’ he wrote at the time, frustrated by the lack of help at Oxford from ‘those who have so much to give and from whom one would have been so willing to learn.’ His History degree complete, he applied to study at the Royal College of Music, but was balked again by ‘a disastrous interview with Herbert Howells: he just told me to go away.’ He was rescued by Joseph Horovitz, a young composer and university friend of Hugh’s brother. Horovitz introduced Hugh to William Lloyd Webber, whose kind and patient instruction was ‘just the thing I needed,’ Hugh said later. ‘Lloyd Webber taught me all my elementary stuff.’ Hugh went next to Iain Hamilton (‘he was conscientious and encouraging, patient and wise’) and Antony Milner, who got Hugh his first teaching work at Morley College. Finally, Hugh approached Mátyás Seiber, who gave ‘quite wonderful lessons, which I still try to pass on in my own teaching. He had a phenomenally agile mind — he’d switch from Bach Inventions to twentieth-century music with no sense of incongruity — together with the kind of discipline which is unfashionable today.’

Hugh started working with Seiber in 1959, the year after he had first met Hans Keller, who likewise represented to him the highest of musical and intellectual standards, and the same sense of continuity from Bach to the twentieth century. Sadly Hugh’s lessons with Seiber came to an end all too soon, when Seiber was killed in an accident in 1960, but Hans remained a friend and mentor for life: ‘His care for one’s better — or at least one’s creative — self, as a naturally self-appointed and ever-vigilant super-ego, never let up,’ Hugh remembered. ‘He taught a whole generation of us. Only a lucky few of us formally, the rest by this process of friendly, undogmatic osmosis of a remarkable personality into one’s own: by personal example, in fact.’

Hugh and Hans continued to meet every year at the Dartington Summer School, which at that time was gathering for the benefit of young British composers a most remarkable wealth of musical talent from all over Europe and beyond — Hugh always described Dartington as the single most important part of his musical education. Another significant lifelong friend and influence whom he first met there was Alexander Goehr, through whom Hugh encountered the music of Messiaen and Schoenberg. Visits to the Darmstadt summer schools in the late 1950s allowed Hugh to study in greater depth the language and techniques of the Second Viennese School, and the technical and expressive possibilities opened up by this were crucial to the development of his unique musical voice — evident in the Variations for Viola and Piano, Op.1, the first of his works to be published.

Hugh’s String Quartet No.1 was his first commission from the BBC (for the 1962 Cheltenham Festival) and he eventually wrote four further important works in this medium (in addition to the unnumbered Quartet in B flat first performed in an SPNM concert at the Cheltenham Festival in 1959).

It was his next BBC commission, Scenes from Comus for the 1965 Proms, that was to make his name. Writing decades later, William Glock described it as one of the most outstanding works he commissioned during his time in charge of the Proms and it has remained enduringly popular, its most recent Proms performance being in 2019. 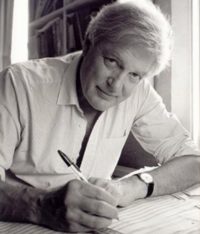 Teaching was a major part of Hugh’s life. ‘I always liked teaching,’ he said, looking back after decades of it, ‘and over the years I have become gladder and gladder that I’ve spent so many years of my life, such a large proportion of my limited talents and flagging energies, in teaching people.’  Following his early classes at Morley College and the WEA, he taught at the Royal Academy of Music in the early 1960s, before moving to Glasgow University in 1966 and Liverpool University in 1971, where his ‘wonderfully perceptive lectures’ were remembered vividly by the young Chilingirian String Quartet, who joined the university as string quartet in residence in 1973 and became close friends. (The Chilingirian Quartet went on to record four of Hugh’s string quartets for Conifer Records in 1992.) In 1976 he joined the Faculty of Music in Cambridge, where Alexander Goehr had been appointed Professor, and where he remained as Fellow in Music at Churchill College until his retirement in 1999. His teaching there is remembered in affectionate detail in this article by David Nicholls, whom Hugh taught in the late 1970s, and the memories of his composer-colleagues Alexander Goehr and Robin Holloway can be found on the Faculty website here.

Of Hugh’s major orchestral works, one that particularly impressed Hans Keller was his Symphony, written between 1974 and 1981 and premiered at the Proms in 1982 by Gennadi Rozdestvensky and the BBC Symphony Orchestra. ‘A real symphony! The 1st in ages: genuine, symphonic thought,’ declared a delighted Hans in a congratulatory postcard to Hugh afterwards. Hugh replied with characteristic self-deprecation, confessing how anxiously he had awaited Hans’s verdict, ‘thinking a) has he heard it? b) has he missed it? c) has he heard it but doesn’t like it?’

Despite his remarkable abilities, Hugh was unfailingly modest about his work and approached everything he did with principled conscientiousness. Colleagues at Cambridge remember the immense trouble he took over his students and the same care was extended to his writing, broadcasting, examining and everything else he undertook. This, as his friend Leo Black observed, ‘meant that time for composition was limited’ — a fact that frustrated some of his admirers and commissioners, among them Hans, trying to coax another string quartet from Hugh: ‘You owe it to your talent to respond to this commission … I implore you not to walk past one of the main purposes of what you are around for.’

Hugh was, however, good at so many things — ‘the most intelligent person I have ever met,’ remembers the composer Thomas Hyde in a fascinating personal reflection on Hugh and his music. Hugh’s literary sensitivity (displayed in full by his glorious songs) and his widely cultured mind also made him one of the best writers on music around — a selection of this work, Staking Out the Territory, was published in 2007, the same year as the first full study of his music, The Music of Hugh Wood by Edward Venn. Robin Kinross’s personal memoir of Hugh as a writer of concert programme notes is a lovely illustration of just how much wisdom and care Hugh lavished on everything he wrote. In any case, as Christopher Wintle (who published Staking Out the Territory) has pointed out, there was a benefit to Hugh’s ‘exaggerated conscientiousness’ — an extraordinary quality of attention. ‘He listened, looked and read like no-one else. And when it came to pursuing his causes he could be as tenacious as a whole pack of dogs.’

Serious and passionate, and (as Leo Black put it) ‘vociferously loyal’ to what he believed, Hugh was also magnificent fun to be with, and his laughter will long echo in the ears of his friends — who were numerous, thanks to his infectious delight in other people.

After Hans Keller died, Hugh was instrumental in the establishment of the Hans Keller Archive at Cambridge in 1996 and kept a friendly eye on the early work of its cataloguing. When Milein founded The Cosman Keller Art & Music Trust ten years later, she and her trustees naturally asked Hugh to be a Patron and he was a loyal supporter of her enterprise ever after.

We miss you, Hugh.

“For a long time now I’ve been sleeping badly, and as often as not awake unwillingly to hear the ﬁrst bird’s solo breaking through the indigo darkness, before the light and the general dawn chorus. Naturalists will tell us that this choir, although it seems to be one of Nature’s arbitrary beauties, has in fact a strictly functional signiﬁcance. Each bird is renewing its claim to its own territory for the 24 hours which lie ahead. It struck me that composers, too, sing in order to stake out their territory: in fact we sing – or should – in order to ﬁnd out what our territory is. Part of the process of creating art (part of its function too) is the slow painful business of self-discovery. It’s enough for most of us to discover truly where our territory lies.”

There is an obituary in The Guardian by Leo Black. Leo remembered their long friendship at greater length in his book BBC Music in the Glock Era and After. Staking out the Territory is available here and Edward Venn’s study of Hugh’s music is now out in paperback here. An appreciation by Susi Woodhouse of the Hans Keller Archive in Cambridge can be found here, and an interview with Hugh on his 70th birthday by Bill Newman can be found here. Further obituaries can be read in The Times, The Daily Telegraph, The Gramophone, the Camden New Journal, the British Music Society and many more online sources.